If you’ve heard of Nicholas Negroponte and MIT Media Lab, chances are you’ve also heard of the OLPC (One Laptop Per Child). If Negroponte doesn’t ring a bell, here’s the briefest of introductions: an architect by training, professor at MIT, founder of MIT Media Lab - a laboratory for new media and a high-tech playground for investigating the human-computer interface. His most famous work is the bestseller book Being Digital which made famous his forecasts on how the interactive world, the entertainment world and the information world would eventually merge. In 2005, he founded the OLPC program which would become one of two things that would forever blight his otherwise impressive legacy.

We aim to provide each child with a rugged, low-cost, low-power, connected laptop. To this end, we have designed hardware, content and software for collaborative, joyful, and self-empowered learning. With access to this type of tool, children are engaged in their own education, and learn, share, and create together. They become connected to each other, to the world and to a brighter future. The best preparation for children isn’t test prep. It is “to develop the passion for learning and the ability to learn how to learn. Oiginally proposed in 2006, OLPC aimed to build an inexpensive laptop that would be sold to governments in the developing world and made available in turn to the children in those countries via their respective ministries of education. Over the course of the past 6 years, the OLPC has fussed with hardware and software specs, finally building a laptop (a series of models actually - XO-1, XO-1.5, XO-1.75 and finally the XO-4) that costs $200 (twice that of the originally promised price).

The design goals of OLPC were:

The operating system that ran on the XO machines were a version of Linux (Fedora) with Sugar UI. In short, while it had “laptop” and “PC” as monikers, there was no ‘Windows’ about it. 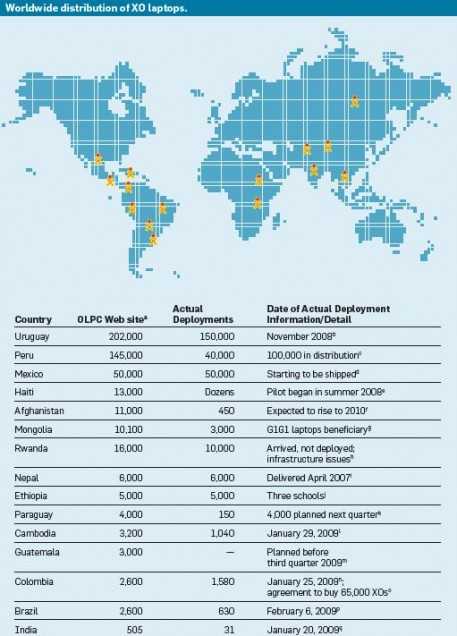 The chart and the contents of this section are from Namank Shah’s essay on the failure of OLPC. The OLPC Foundation’s goal was to sell 150,000 million laptops by the end of 2007. By 2009, only a few hundred thousand laptops had been shipped to the developing nations. The actual distribution of the laptops points to an obvious failure of the program. When OLPC was first founded, it only took orders in lots of 1 million. However, no developing nation could risk the capital necessary to buy these 1 million laptops, especially if there was no data proving the benefits of the program. OLPC was then forced to lower the minimum purchase number to 250,000 laptops. The founders initially thought that a lot of countries would be willing to pay for these laptops en masse, which would ensure cheaper production costs for individual laptops. However, the target nations do not have that much money; therefore, the minimum deployment size had to be lowered over time. As a result of such unrealistic goals, delivery of the laptops was low. The figure 1 shows the actual number of laptops distributed in specific countries by the OLPC foundation. The first number is the data shown on OLPC’s main website, and the second number is the actual number of laptops in the various schools. A major cause of discrepancy between the two numbers is that the OLPC website does not distinguish between ordered, shipped, or delivered laptops.

The Verge’s Ari Robertson has arguably written the definitive piece chronicling the promise and failure of the OLPC. Excerpting key sections from his April 2018 piece, entitled how it was going to change the world - then it all went wrong:

The original model featured a hand crank that (hold your breath) would serve as an alternate power source.

If you remember the OLPC at all, you probably remember the hand crank. It was OLPC’s most striking technological innovation — and it was pure vaporware. Designers dropped the feature almost immediately after Negroponte’s announcement, because the winding process put stress on the laptop’s body and demanded energy that kids in very poor areas couldn’t spare. Every OLPC computer shipped with a standard power adapter.

OLPC was a philosophy inspired by a fellow believer of constructionism Sugata Mitra (of Hole in the Wall Project fame).

OLPC wasn’t just a laptop, it was a philosophy. Negroponte insisted that kids needed to personally own the computers, so they’d be invested in maintaining them. And they should be able to use them anywhere, not just under teachers’ supervision. For inspiration, he pointed to educational researcher Sugata Mitra’s famous Hole-In-The-Wall experiment, where children taught themselves to use a computer in a Delhi slum. Mitra’s vision was more minimalist than OLPC’s, but both projects were almost totally focused on distributing computers. Kids’ natural curiosity was supposed to do the rest.

Intel chairman Craig Barrett scathingly dubbed OLPC’s toy-like prototype “the $100 gadget,” and Bill Gates hated the screen in particular. “Geez, get a decent computer where you can actually read the text”

But it is not Windows

OLPC pushed the laptop’s cost to a low of $130, but only by cutting so many corners that the laptop barely worked. Its price rose to around $180, and even then, the design had major tradeoffs. The XO-1 was easy to take apart — there were even a few spare screws inside its handle. But things like the screen could only be replaced with OLPC-specific parts. The solid-state storage was sturdier than a traditional hard drive, but so expensive that the XO-1 could hold only a single gigabyte of data. Some users complained that the one-piece rubber keyboard fell to pieces after too much typing. The internet-sharing system barely worked, and it was quickly removed from Sugar. While Sugar was an elegant operating system, some potential buyers were dubious of anything that wasn’t Microsoft Windows. They wanted students to learn an interface they’d be using for the rest of their lives, not just with the XO-1.

While OLPC was still designing the XO-1, Intel announced that it too was building a cheap educational laptop. The Classmate PC would be small and rugged like OLPC’s design, but run the more familiar Windows XP operating system and sell for somewhere between $200 and $400. As OLPC’s full-scale launch slipped to 2007, and its $100 price tag faded away, Intel shipped the first Classmate PCs to Brazil and Mexico. Negroponte was furious. He lashed out at Intel, accusing it of approaching OLPC’s target markets and dumping laptops below cost to destroy the nonprofit. “Intel should be ashamed of itself,” he said. “It’s just — it’s just shameless.”

OLPC, which prided itself on not being a tech company, had little experience landing hardware contracts. It announced incredible sales numbers, only to have buyers scale back or drop out. Officials in India, one of OLPC’s original seven customers, reportedly killed the deal because of a long-standing feud with the Media Lab. In a particularly stinging loss, Libya canceled an order of 1.2 million XO-1 laptops and bought Classroom PCs instead.

In mid-2007, Taiwanese company AsusTek revealed an eye-catching new computer called the Eee PC, delivering a cheap, tiny laptop without OLPC or Intel’s educational trappings. The Eee PC had a lot of the XO-1’s drawbacks: slow performance, a tiny screen, a minuscule hard drive, and a cramped keyboard. But the $399 machine was an unexpected success. It sold 5 million units in the first year, and other laptop makers quickly released their own “netbook” computers, fueling a massive boom in cheap, tiny laptops.

And Negroponte was losing interest in hardware. After he outlined a dramatic (and ultimately metaphorical) plan to drop tablets out of helicopters, the OLPC Foundation distributed mass-market Motorola Xoom tablets in two Ethiopian villages as a new experiment. In 2012, it reported that children had learned the alphabet within two weeks, and within five months, they had “hacked Android” — which referred to turning off software that disabled the camera. As Android phones and tablets became more sophisticated, Negroponte abandoned development of an OLPC solar-powered XO-3 tablet. He joined the newly founded Global Literacy XPrize soon after, effectively putting OLPC behind him.

OLPC released a low-end American consumer tablet in 2013, slipping a plastic shell over a generic Android device. The same year, it released an updated version of the XO-1 with new components and an optional touchscreen, called the XO-4. But there were no more grand experiments or expansive plans for the future. In early 2014, the Boston-based OLPC Foundation quietly disbanded, and OLPC News shut down. “Let us be honest with ourselves. The great excitement, energy, and enthusiasm that brought us together is gone,” Vota wrote in a farewell post. “OLPC is dead.”

Like many remaining OLPC enthusiasts, San Francisco State University Professor Sameer Verma isn’t dogmatic about hardware. Sugar Labs is a self-contained project at this point, and its apps have been ported to a web-based launcher called Sugarizer, which can run on just about any platform. In addition to laptops, several OLPC programs distribute standalone servers containing articles from Wikipedia, educational videos from the Khan Academy, and customized material from local educational programs. They’re huge repositories of information for kids and teachers without steady internet connections, and can be accessed via any kind of laptop or tablet.

Some OLPC deployments are still run through governments. Rwanda, for instance, has spent the last decade gradually giving laptops to young students. The project’s coordinator Eric Kimenyi says it’s distributed 275,000 across 1,500 schools, a reach that is expanding as more schools get access to electrical power.

Some projects, like OLE Nepal, work with education departments but are run as nonprofits. Instead of trying to reach an entire country, OLE Nepal has spread around 5,300 laptops across areas where OLPC’s hardware still has an advantage: remote rural districts with no data networks or wired internet, accessible only through hours of hiking.

Thirteen years ago, OLPC told the world that every child should get a laptop. It never stopped to prove that they needed one.